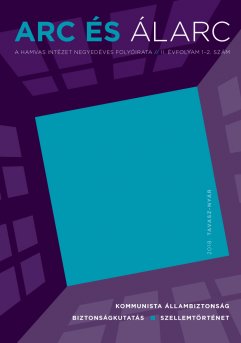 The author presents the unknown details of the biggest corruption scandal of Hungarian football, using as his source a police document which was classified in the communist era. The internal relationships among the different associations and sports communities were so strong that the hands of the police were tied and the investigation stopped. Hungarian football could not be renewed and fixed.

Zsuzsanna Borvendég: Journalists in the service of Communist State Security

In the recent years it has become more and more clear that the Hungarian media was totally infiltrated by the intelligence of the Communist State Secuity. The paper presents in detail the whole network, the functioning, the structure and the key players of the so-called Press Station, the intelligence organization which controlled and manipulated the Hungarian media, directed secretly by the International Journalists Association and behind it by the KGB.

Gábor Mező: The chatty kungfu master or the adventures of a military intelligence officer

In the seventies a special company of a lawyer and two diplomats was compromised being accused of smuggling. The investigation made it clear that one of them was a secret agent and one of the two others the major of the Communist State Security. They managed the illegal deals with the approval of the military intelligence, and one of them has become the key player of suspicious transactions even after change of regime. The paper clearly proves that the Hungarian Airlines (MALEV) was entirely directed by the communist military services.

The author tells the story of an amateur intelligence agent. Zoltán Hedri emigrated to Israel in 1957, where he began to work at an experimental missile compound. Later he would have had to return to Hungary, so he agreed to make secret reports about his workplace and to sneak out secret documents. After completing the task, he returned to Hungary and was ready to write an anti-Israeli propaganda book, entitled „Israel, the Land of Promises”, which was published in thousands of copies.

Balázs Orbán-Schwarzkopf: The death of a president

Anvar Sadat, the president of Egypt was shot a few years after he had signed the peace contract with Israel. He angered both the Arab world and the Soviets. The paper demonstrates through the analysis of many documents that the murder was planned and managed by the Soviets. It was a message to everybody, and the successor, Mubarak did understand the lesson and turned his back on the West-oriented politics of his predecessor.

Attila Kasznár: The thousand faces of India, the land of terror

The paper presents –  emphasizing the importance of intedisciplinary approach –  how the unclassified documents of the archives can be used to demonstrate the psychological mechanisms in the teaching of HUMINT. In some famous cases, which films are made of, as The Assets or Zero Dark Thirty, the documents of the archives would shed light on other important aspects the films had not highlighted and which would be useful for learning. The author demonstrates through documents of the Historical Archives of the Hungarian State Security how a very complicated psychological game, a special form of „micro-Psyop” had evolved between the American Secret Services and the Washington Station of the Hungarian Communist State Services in 1988-89.

The authors analyze in their paper the present and the future of the intelligence based on human sources (HUMINT). Although they don` t deny the significance and usefulness of the work of agents, they present what kinds of new challenges we should face because of the expansion of the internet and the cyberspace.

The memories of a Hungarian jesuit – interview with Father Ferenc Szabó

The philosopher jesuit priest emigrated from Hungary and directed the famous Hungarian Radio of the Vatican in Rome. Under the socialist regime it was a very valuable source of thoughts and information for many Hungarians. He was the interprator for two popes and one of the central figures of anticommunist intellectuals visiting the Italian capital.

Ildikó Veres: Life and thought. The philosophy of Bela Brandenstein and Bela Hamvas

The paper compares the life and ouvre of two famous and significant Hungarian philosophers, Béla Hamvas and Béla Brandenstein.

The author- presents the life and work of Szabédi László, who, in Transylvania, held on to his Hungarian roots and culture and did not become the accomplice of the communist dictatorship in Romania. He opposed to Nicolae Ceauşescu defending the Hungarian University Bolyai, so he became targeted by the Securitate, and committed suicide.