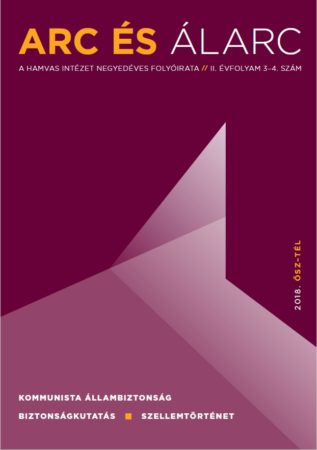 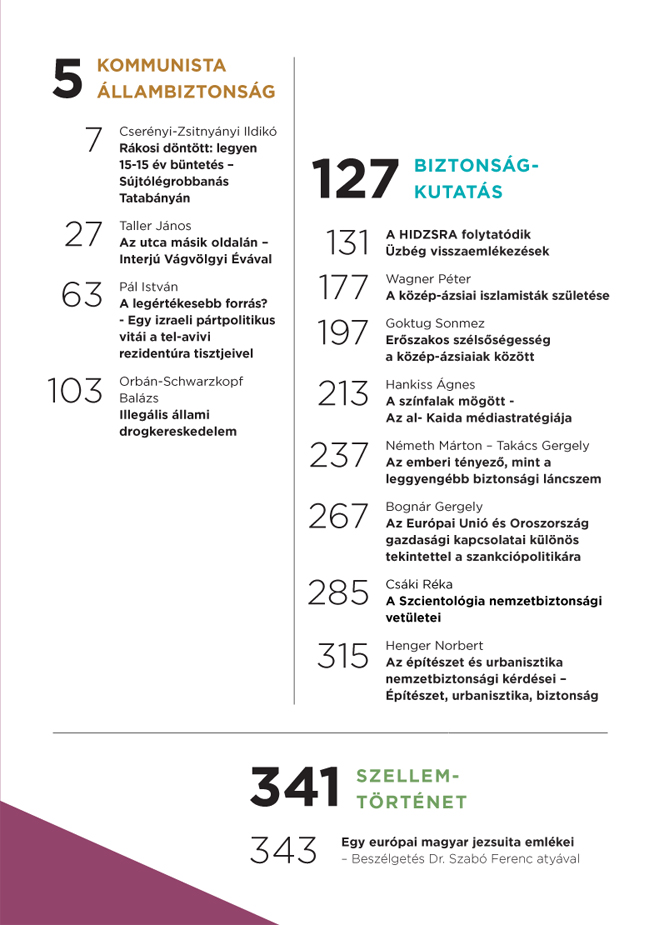 The 30 December 1950 firedamp explosion in Shaft XII of the Tatabánya Coal Mine was one of the deadliest disasters in Hungarian history with 81 fatalities. Similarly to other such accidents, the Communist regime set out to prove that it was a result of political sabotage. The study presents how the State Protection Authority started looking for scapegoats, what kind of sentence the Secretary General of the Party Mátyás Rákosi had predetermined, and how the court proceedings were adjusted to fit the sentence.

János Taller: On the other side of the street – An interview with Éva Vágvölgyi

In Communist Hungary, people publicly acknowledging their faith and denomination were almost constantly targeted. Éva Vágvölgyi and her family were also harassed by the regime. In the interview, she recalls how her parents were persecuted for their religion and how she was slandered and intimidated by the Communist secret service for organizing a small Catholic community.

István Pál: The most valuable source? – Developments in Israeli domestic and foreign politics in light of the conversations between Mapam Secretary Jichak Patish and the officers of the Tel Aviv station

Although Hungarian intelligence services were present in Israel from the year after suppressing the revolution of 1956 until the Six Day War, neither Department II/3 (Intelligence) of the Ministry of the Interior nor Section Command III/1 had as much success with recruitment as their Soviet, Polish or even the Czechoslovakian counterparts. While Polish intelligence planted an agent (Levi Levi) among the technicians of Shin Bet and Czechoslovakians got a scientist into Techion Institute, Department II/3 of the Hungarian Ministry of the Interior came too late to exploit the teething weaknesses of Israeli security that stemmed from intense immigration. The station had a relatively widespread social network, but it is likely that Israeli counterintelligence had almost everyone under surveillance. The conversation with Jichak Patish may have been directed from above; probably by the Israeli Foreign Ministry. From a professional point of view, the recruitment of József Meir may also have been a source of concern, as he was already more loyal to Israel than the Communist movement. We could only see the whole picture if we knew the Israeli side of the story, but strict censorship makes that an unrealistic hope.

Balázs Orbán-Schwarzkopf: State-run illegal drug trade – observations based on the documents made available for research

“Our membership in the committee is as significant politically as economically. This is the only committee, mind you, which the Hungarian People’s Republic is a member of. And, as it is also known, Hungary is a leading exporting state in the global drugs market.” The words of former Foreign Minister Endre Sík at the 5 April 1961 UN Political Committee meeting refer to a territory still unexplored by research: state-operated, subsidized illegal drug trafficking. Based on the documents made available for study, this paper discusses how and how deeply Hungarian secret services were involved in the international illegal drug trade.

In the summer of 2018, Uzbek man Rakhmat Akilov, who drove a truck into the crowd on a popular pedestrian street in Stokcholm in the spring of 2017, was sentenced to life imprisonment by a Swedish court. Akilov’s attack was the fourth spectacular terrorist assault perpetrated by Uzbek individuals around the world in the course of a year. At New Year’s 2017 in Istanbul, both the Saint Petersburg subway and Stockholm in April, New York in November: each attack carried out in different ways by an Uzbek assailant. While experts have long been aware of Uzbekistan’s exposure to terror, this wave of attacks in several major cities of the world brought back “Uzbek terrorism” into the spotlight. Naturally, terrorist attacks committed by Uzbek radicals are also drawing increased attention towards Central Asia.

This study strives to answer the question how the first Islamists appeared in Central Asia. This line of inquiry is doubly intriguing given that to the best of our knowledge, the Soviet Union was an enclosed world under the complete physical and ideological control of the Communist Party. How could Islamism still strike roots and gain followers in a community hidden behind the Iron Curtain and exposed to seventy years of ideological “molding”?

Ethnic Uzbeks carried out terrorist attacks in Istanbul, St. Petersburg, Stockholm, and New York City in 2017, making it clear radicalization in the Uzbek and Central Asian global diaspora is a growing global security concern. There has been an increase in Uzbek-language terrorist propaganda, and terrorist groups dislodged from Uzbekistan have built up significant operations in Syria. These groups are exploiting grievances over autocratic regimes and corruption at home to recruit Central Asians and support global terrorist agendas. Central Asian operatives trained in Syria have already returned back to their home region to plot attacks and may pose a wider threat to international security.

Agnes Hankiss: The backstage of the al-Kaida` s Media Strategy

Jihadi terrorist organizations view their media opportunities as weapons in their war against the West. While there is a considerable body of work discussing the content and form of AlQa’ida’s media, including both their written press and video products, we have significantly less information on what goes on behind the scenes: how the tactical elements and strategic goals are designed and implemented to generate these products. The paper asserts that while we still have insufficient information on the media strategies of the Islamic State, due to the ideological, operational and network-to-network continuity between the two organizations, the documents shedding a light on Al-Qa’ida’s press efforts can serve as valuable resources in understanding present-day (and maybe the future of) jihadi media as well.

Márton Németh and Gergely Takács: The human factor as the weakest link of security – The business and national security aspects of social engineering

The aim of this paper – more a thought-provoking essay than a study – is to draw attention to a modern branch of security studies, namely business security, which has both economic and national security aspects. Business security has three basic fields: physical, human and IT. Out of these three, the human factor might be considered the weakest link. The primary goal of these business security fields is to create, maintain and improve the conditions for safe operation and protect the value generated by the company (in the form of manufactured devices, know-how or data etc.). Today, the highest value generated by the activity of a business organization is (personal, consumption, internet usage, financial etc.) data and/or research and development achievements, the protection of which is a priority for both the market and the national (including national security) sphere. As a result of technological development, the greatest and maybe most complex risk facing companies (including those operating critical infrastructure) is what we know as social engineering (psychological manipulation), which is based on the above-mentioned human factor and poses a threat and a challenge to all three fields of security. This short writing gives insight into the information, economic and national security risks of social engineering to reveal the complexity and relevance of this threat.

Gergely Bognár: Economic relations between the European Union and Russia and the results of the sanctions policy

The relationship between the EU and Russia has been economically, geopolitically and culturally highly relevant throughout their shared history. Finding the common ground has been inevitable and essential for both parties, especially in a fast-changing, multi-polarizing 21st century world. However, their values, ideology and – first and foremost – their diverse strategic goals often hindered reaching a consensus, which has required (and will continue to require) both parties to show enormous restraint, sense of diplomacy and occasionally tolerance. This study aims to show how the Ukrainian crisis shaped the EU-Russia relationship and where the neuralgic points of this relationship are.

Scientology has gained a special place among the abundance of spiritually organized groups by being on the radar of authorities, secret services and cult-focused organizations ever since it was formed.

The study reveals the main difficulty in positioning scientology as a religion and scrutinizes scientologists’ most controversial religious practice, “auditing”.

The author looks into the real or presumed causes of the tense relationship between the scientologist church and the state authorities and presents some of the criticism put forward by the latter that may serve as grounds for these hostilities.

The study looks at some business enterprises and satellite organizations establishing the legitimate financial background of scientology. It also presents OSA, the church’s own “secret service”, and analyzes its goals and methods.

As (cultural, religious, political, economic) symbols, buildings are suitable targets for attacks intended to destroy or inflict damage on an entire culture. With the razing of the city of Carthage, the entirety of Punic culture was wiped out with a single battle. Or if we look for an example closer in time, we find that in September 2016, ISIS destroyed Palmyra, one of the most prominent ancient ruin cities in the Syrian desert as a symbol of ancient Christian “globalization”.

The question is whether architecture and urban planning are able to address security issues like global warming, migration, terrorism and energy security; whether conscious planning can make our buildings and cities safer without negatively affecting quality of life – or maybe even improving it in certain areas.

Memories of a Euro-Hungarian Jesuit: A conversation with Father dr. Ferenc Szabó on writings, research, poetry and faith. (Part II by Márton Molnár)

The second part of the conversation with Father Ferenc Szabó covers the period after his homecoming. After discussing his work at the periodical Távlatok [Prospects], Father Szabó talks about the Jesuit spirit, his books and research, his personal experiences, struggles and joy. He remembers Valéria Dienes, Father Henri de Lubac, the lectures of Paul Ricœur. Through the ideals of French personalist and existentialist philosophers, poets and authors, he discusses the results of cultural advocacy, his lifelong mission. In relation to poetry, he highlights the connections between faith and love, giving the reader a poetic synopsis of his life.