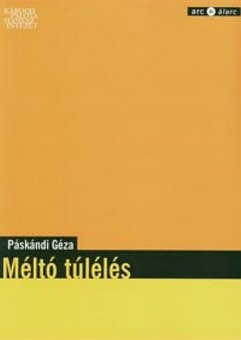 The book collects studies, essays, and letters written by Géza Páskándi between 1978 and 1995. In them, the famous Transylvanian poet and playwright focuses on the questions of the era and Hungarian public life generating fierce controversy.

For instance, it would be hard to give a more concise and expressive account of the fault line between opinionleaders of the regime change than Páskándi did in his letter to Péter Eszterházy: “Yes, we must consider the two main political, ideological, philosophical monsters of the twentieth century equally outrageous. The practice and mortal sins of communism and fascism. Each massacre of race, nation, and culture. Persecution. (…) Well, if someone judged one more leniently and with more understanding than the other, I would strictly and inevitably distance myself from that individual or ‘team’…”

Some of the writings in the book were published earlier in periodicals. However, documents of the cultural and political debate against the former MSZMP (the Hungarian Socialist Workers’ Party) are published here for the first time.